In bodybuilding and fitness, there is an unwritten rule – if you do not do leg press in the machine, then your strength indicators are unlikely to be at a high level, and the muscle mass of the legs leaves much to be desired. This means that without this exercise it will be much more difficult for you to progress, even if you lean on squats with a barbell. Moreover, in some cases, the press will be not only more effective but also safer than squats, which can be very useful. There are several variations of the leg press that allow you to redistribute the load on different parts of the legs, so mastering the technique and all the nuances of the exercise is a priority. In this article, we will consider all the subtleties that will help maximize the benefits of exercise for the entire lower body.

This exercise is one of those movements whose benefits are almost impossible to dispute. This is due to the technique of execution and the nature of the bench press. Most often, it, as a basic exercise, is compared with squatting with a barbell. This is due to the fact that both exercises load almost all the muscles of the legs and significantly develop strength and mass. The main features of the exercise include the following features:

In general, this exercise has far fewer contraindications than squats with a barbell, but the effect and benefit are no less. This makes it very useful both in combination with classic squats (usually the bench press completes the “base” part or the first half of the workout) and as a replacement. If we talk about which muscles work during the exercise, then it is worth noting:

It is worth briefly describe the leg press machine itself. There are several types of equipment where the main difference is the angle of inclination of the moving part. This is mainly 45 degrees, although sometimes there are machines with greater or lesser angles.

It is important to understand that the larger the angle, the stronger the load will be at the same weight.

In cases when you do leg press while sitting, the resistance to weight will be less, so you can easily add more pancakes to the rack. If the exercise is performed in a supine position, then try to choose the correct weight empirically. Often there is controversy over whether to consider the weight of the platform. The answer is always the same – yes, it is. If you could carry out movement without resistance without weight, then such an account would not be required. Many girls do a bench press without additional load, which is already 40-60 kg. Unfortunately, manufacturers do not indicate how much the platform weighs, because if the trainer does not have the necessary information, you will have to evaluate it by eye (and by effort).

It is no exaggeration to say that vertical leg press is one of the most flexible and versatile leg exercises. The main way to change the load is to set the legs. Usually, they distinguish the following options for setting legs. To determine them, you need to draw the X – Y axis and designate the center of the platform:

Sometimes you can see the bench press with one leg. This option is usually not recommended, as it is characterized by increased injury risk and less control of weight and body position. Nevertheless, it is sometimes used to increase the amplitude of motion. It is considered unreasonably risky and does not have advantages over a conventional two-leg press. In some cases, the design of the machine is rather unstable and inconvenient, this can cause discomfort for people with long legs or distort the technique. In this case, you need to abandon the bench or do it with a specific position of the legs (for example, placing the feet in the upper part of the platform). In this case, this will minimize the damage to the structure and ensure the benefits of the exercise.

For most athletes, even if they just started going to the gym, the execution technique will be intuitive. However, it is important to consider how to make the reclining bench press to eliminate common mistakes and potential risks. To do this, you should:

It is important to remember that if a machine with the correct design is installed in your room, which does not distort the amplitude, then you need to lower the platform down to the level where there will be a right angle in the knee. This applies only to the classic embodiment, when the legs are at the level of the middle of the platform, with an average setting of the legs. If you put your feet at the bottom, the angle of inclination will already be more than 90 degrees, so you need to consider this. 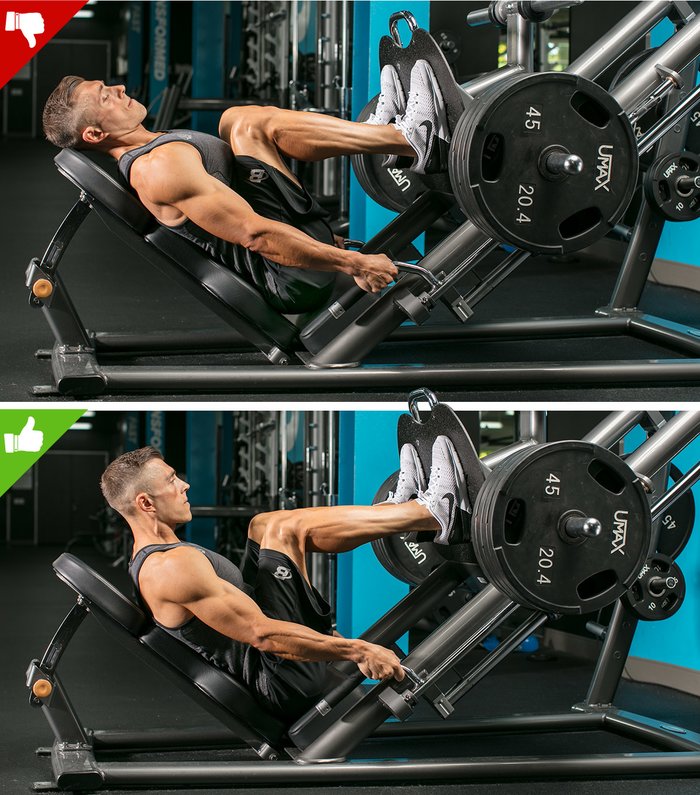 It is very important to master all the technical features and the theory of how to do the exercise correctly. Only in this way will it be fully effective and safe. When neglected, this exercise can be one of the riskiest and most traumatic. So that the bench press does not lead to irreparable consequences, you need to remember the following rules:

Unfortunately, all those “horror stories” regarding the leg press are truthful and based on real cases. The biggest risk is knee extension. With weak muscles, the legs in the knees can bend in the opposite direction under the weight of the weight, which will lead to very serious consequences. Try now best Alpha Pharma steroids supplier roids.vip with best prices and products worldwide. More often this can happen in girls who did not set the locks or in men who overestimated their physical fitness and chose exorbitant weight. Do not lower the platform too low. Firstly, it will put a heavy load on the knee joints, and secondly, it will cause the lower back to break away from the back, distorting the technique. There were also cases when overweight people injured their ribs, “pushing” their knees into the diaphragm. However, this can only happen in cases

In general, doing everything right, the bench press will be much safer than squats, primarily due to the lack of compression load on the spine. In case of negligent execution, the exercise can become much more dangerous precisely for the knee joints, therefore pay maximum attention to the technique.

Some athletes are often interested in how to replace the leg press. The most suitable alternative would be squats with a barbell. Otherwise, the bench cannot be replaced. You can either do it or avoid it. Its high effectiveness and advantages make this exercise very useful, due to which many athletes include it in their program.

What is Alternative Medicine?

Avoiding Aches and Pains when Working from Home